A Run of the Community

Maybe two or three times in the morning each week, just as the horizon to the east turns from a purplishgray to the soft orange of sunrise, you'll likely to see a group of women running along Interlachen Road in Suntree.

They call themselves the “Suntree Vamps,” and their morning runs take them around the quiet, well-maintained roads in and around one of Brevard County's best-known neighborhood developments. Their early-morning runs typically start and end at Interlachen Park.

”It's quiet, it's safe, and with all the neighborhoods we can rack up the miles," said Dr. Liz White, a Suntree resident and one of the running Vamps.

Suntree is one of the most popular areas in Brevard. It's made up of 4,500 households, including single-family homes, apartments, and townhouses, as well as schools, daycare centers, bike paths,  walking trails, two 18-hole golf courses, several parks, and 50 neighborhoods or sub-associations. It has an estimated population of 13,000.

The community's Suntree Master Homeowners Association has helped ensure home values remain stable over the decades. Its numerous trees and c a r v e d - out green s p a c e s not only add to the community ’s peaceful ambiance but it also facilitates a peaceful coexistence with some of Florida's treasured wildlife.

Maybe one of Suntree's hidden charms - because of its sidewalks, parks, paths, and quiet subdivisions – it accommodations to walkers, runners, and cyclists. Taken as a whole, it boasts nearly 100 miles of trails, sidewalks, and streets.

Many 5K, 10K, half marathon, and full marathon participants have undertaken their conditioning training in Suntree.

"If we need a four-mile run? Easy," said White, an audiologist with a practice, Harbor City Hearing Solutions, in nearby Viera. "But if we dip into neighborhoods, we are able to get 20 miles in."

For runners like White and her Vamps, another perk is the opportunity for up-close encounters with wildlife. Many animals, like panthers and foxes, are returning to their morning habitats just as the Vamps are finishing their runs, and they'll dart across the roads to nestle in the hidden brush. Some even get a rare sighting of an alligator crossing the road going from one lake to the next.

And of course, the morning is when the many species of birds in Suntree come out of their nightly slumber to sing the Vamps "good morning." It’s hard to imagine anything more serene than mornings being serenaded by a meadowlark or a warbler.

The only thing that might make it better is the friendliness of the motorists who live in the community and seem to appreciate the efforts of the runners and other active neighbors.

"It's great when other people are friendly and wave or say hello," White said. "I love this community." 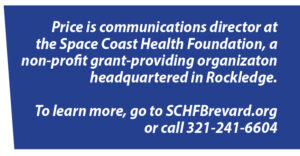